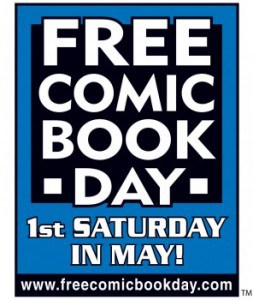 First off, let’s just remind folks that this Saturday, May 3, is Free Comic Book Day. There are plenty of great comics coming out that day, and I’ll try to discuss them after they come out, but there is in one in particular that really went above and beyond in my estimation. Myatt Murphy and Scott Dalrymple (AKA the wacky Second 2 Some Studios geniuses who just received an Eisner nomination for “Talent Deserving of Wider Recognition” for fade from blue) put together a great introduction to comics and their series in a book called “Christa Shermot’s 100% Guaranteed How-To Manual for Getting Anyone to Read Comic Books!!!”

If the comedy and the chance to get a free peek at a great fade from blue issue excerpt is not enough, the creators (with the help of some of the big names in the industry and the industry press) concocted a list of “if you like…” (various TV shows, movies, books and other forms of mainstream pop culture) from which people can choose and then see a comic equivalent to “ask your retailer for…” (For example, if you like the ABC TV show “Alias”, this list recommends asking for Oni/Rucka’s “Queen and Country”) This list should be hanging year-round in every comic book store and Murphy and company should update it on an annual basis. The list alone makes the comic incredibly valuable to anyone who wants to win friends, family and/or co-workers over to checking out comic books. The tag line on the comic cover even involves every reader in the story: “Plus! The one person you thought you would never see reading a comic!”

Classic. I look forward to see how successful this comic in particular is received. Pick it up and spread the word.

It’s Easy to Praise When They Get the Eisner Nomination

The work is hard not to like, as Beland achieves two things:

1. He’s brutally honest (and hard on himself) in detailing the early days of he and Lily’s romance (it covers their first meeting, her trip to visit him in California, his first trip to Puerto Rico) and yet the manner in which he conveys with candor is endearing

2. He perfectly captures the effect that Lily has on his life. You clearly sense that to a certain extent, Beland’s been adrift and Lily proves to be his (and this story’s) anchor.

The book doesn’t get bogged down in the story of two people. Rather it’s the story of their family and friends as well as Tom and Lily. Did I mention it’s really funny? Get it.

Supreme Collection: Rob Liefeld Is Not All Bad

Do a search of the name Liefeld, you’ll find more anti-Liefeld websites than you might in a search of Todd McFarlane. Everybody’s got some bone to pick with him, be it a fan or a retailer. I’m not here to defend or condemn him. Rather I want to make people aware that no matter what he did, the guy was once smart enough to hire Alan Moore to revamp the Supreme character.

Last December, Checker Book Publishing Group released Supreme: The Story of the Year. It’s hard to believe that Moore started revamping the character back in 1996, but it has been that long. Checker wisely provides Moore’s take on the character at the outset of the 312-page, $26.95 book, which collects the 12 issues/chapters (Supreme 41-52).

What I want to do, is to do a really supreme being. I see this is not being a retro book, not in the way 1963 was. What I’d like to do is try and infuse this new ‘90s model type superhero with all the imaginative power of the superheroes of the previous 50 years. To give it that sort of humor and grace and see if we can come up with some sort of composite that’s viable for the next century.

Supreme looks like simple work, but there’s a lot of complexity there even though what you’ve got on the surface is a fairly light, readable, entertaining comic.”

And I think Moore succeeded. Artistically with Rick Veitch doing some great homages in the flashback scenes, as well as periodic contributions by Keith Giffen and Dan Jurgens, Moore does some interesting counterpoint/contrasting of styles when he has the typical mid-1990s Image style superheroes (the Liefeld feel) sitting right next to art styles of the past. It’s interesting to note that Moore’s first issue (41) was presented in memoriam to the passing of Curt Swan (1920-1996). Checker wisely notes this in the front section of this collection. The irony should not be lost on readers. For me, going forward Supreme always had a tinge of Swan in it. I never had an interest in the character before Moore’s arrival and he made me genuinely enjoy the character.

Supreme in many ways was a “composite that’s viable for the next century” when it comes to Moore’s work. You can read these issues and then pull out issues of Tom Strong (or any of Moore’s America’s Best Comics work for Wildstorm) and see the evolution of Moore’s storytelling abilities. Don’t get me wrong, in both this Supreme run and his ABC work, Moore is at the top of his game, but he is still a storyteller who wishes to explore the comics medium (for now).

It may strike you as odd that I’m reviewing a 2002 collection of 1990s comic, but realize that in the month of May, Checker is releasing the second Supreme collection, Supreme: The Return. As Checker describes the second book, it: “collects the final 10 issues of Moore’s … Chris Sprouse takes over pencilling chores from Joe Bennett. Rick Veitch contributes more of his masterful flashbacks to bygone eras of hero comics, with nods and winks to Julie Schwarz, Neal Adams, Mort Weisinger, John Broome, EC, and MAD Magazine. Cameo flashbacks by Jim Starlin and Gil Kane round out a star-studded artistic roster…”

If you missed out on Moore’s mid-1990s work on the character, you would do well to seek these two books out. Like a good film, every time you read these stories, you learn something new.

Stan is still the man