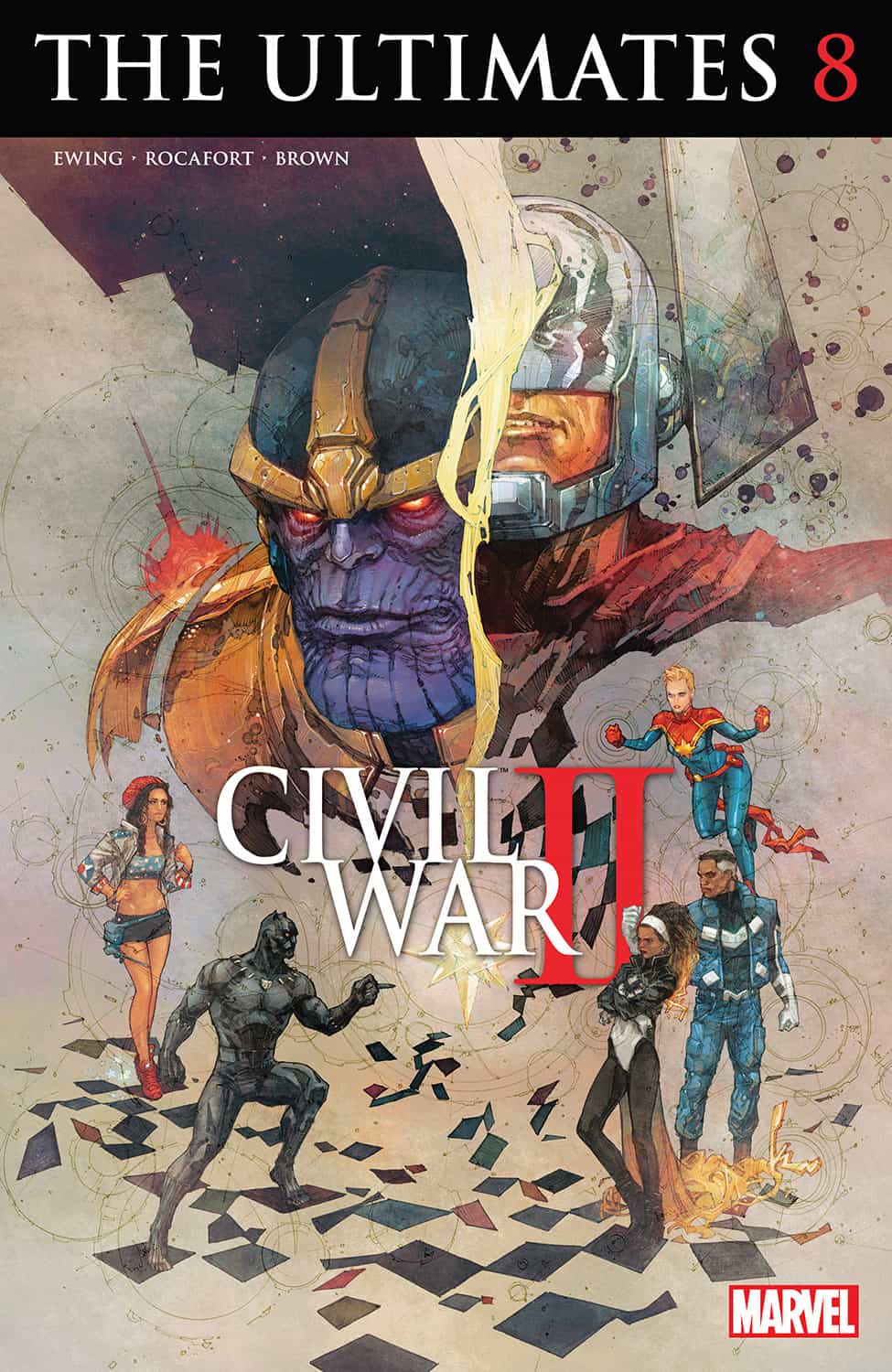 I would like to thank my local store, Book Nook, for providing me with access to some advance copies to review.

Oddly enough I do not have any comics to review that were released on January 15 that I didn’t already preview review last week. With the new advance reviews format, this may happen every week or so.

Fantastic Four 65
Waid/Buckingham
I have already apologized to Mark Waid for joining the ranks of people ranking on his “Young Johnny” approach to the character. I should have waited awhile to see where he was heading with the character before making my assessment. Without spoiling anything, I dare say my fellow professional, amateur, message board and armchair critics may reconsider their assessment after reading this issue. In addition, the physical comedy (in which the regular art team of Wieringo and Kesel excel) is maintained thanks to the skills of guest artist Buckingham. And more importantly, Waid is expanding the depth of Reed’s character in a manner that makes him a more interesting read (without ignoring the core of the character).

The Amazing Spider-Man 49 (Marvel)
Straczynski/Romita Jr./Hanna
You have to pity JR Jr., given how solid an artist he is. His father never had to put up with Spidey writers inserting so much dialogue that it obscured the art. But that’s exactly what JMS is doing to JR Jr. in scenes where Ezekiel and Peter. That being said, Romita concedes defeat and makes the scenes intentionally sparse. Clearly Ezekiel will play a role in issues to come, so JMS would do well to be economic in these “heavy dialogue” scenes. Amidst the tragedy and standard superhero challenges, the creative team still interjects comedy that delivers (it’s a balance I appreciate and believe is essential to any Spidey title).

Batman 611 (DC)
Loeb/Lee/Williams
First off, the cover while well designed has absolutely nothing to do with the story. Would Batman really respond to Catwoman in mid Poison Ivy vine strangle by flapping his cape. Has he ever done that with a cape since the days of Adam West. The cover exceeds the point of solid graphic design and hurtles clear into the world of absurd. Now for the insides, there’s a great flashback to Bruce’s childhood (and for once it isn’t going to see Zorro at the movie theater),. I say great because of the coloring job by Alex Sinclair. Folks looking forward to the Loeb World’s Finest series (or whatever it will be called) get a taste of what’s to come. Side note to Lee, Lois Lane in tight miniskirt may make for a great fantasy drawing, but she’s a successful journalist, not a supermodel (but someone needs to tell Republican pundit Laura Ingraham the same thing).Loeb’s ear for dialogue only continues to improve.

The Adventures of Superman 612 (DC)
Casey/Aucoin
In a tale entitled “The Man of Yesterday vs. The Man of Tomorrow” Casey and Aucoin go on a metaphysical journey. The problem of metaphysics (mixed in with a political message) is that there’s an element of the unknown that advances the narrative. Unfortunately it enables for a major gap in the story that is never explained. While artistically there were some interesting Roy Lichtenstein homage moments in general the stories too uneven to fully enjoy.

Uncanny X-Men 418 (Marvel)
Austen/Asamiya
I’m amazed at the poor quality of this issue’s art. Forget the giant noses and fang teeth mentioned in my last review. Through some computer error or oversight on the part of the art team, Annie Ghazikhanian (the nurse who now dresses like it’s the 1960s) is missing an eye in every other panel (the same thing happens to other characters throughout the issue). It’s an amazing quality assurance failure on the part of either the printer or the editorial team. And Austen has clearly not hung out with a six year old recently, as a child speaks with his mother (about matters of life and death mind you) as if he were an adult. Finally, his take on one of the founding X-Men (Warren/Angel) is so astoundingly left field I cannot believe it. (And the villain Lobo looks like The Owl on acid, BTW).

Y: The Last Man 7 (Vertigo)
Vaughn/Guerra/Marzan
As this book hits the road, things are getting a little too convenient. Given the expanse of land (between Ohio and Massachusetts) being covered by the characters, resolutions and plot connections are being made too easily, particularly given Hero’s last scene in this issue—where does it happen and how did she get there so quickly). That being said, Hero’s character is far less one-dimensional than I first thought. In addition, another layer of mystery has been added to the tale with the town of Marrisville, Ohio.

Captain America 8 (Marvel Knights)
Rieber & Austen/Hairsine/Miki
I don’t know how much the improved accessibility of this issue (versus the first part of this arc) is due to Austen coming on board as writer with Rieber. I also wonder if this signals Rieber being fired in mid-arc, because the Marvel website makes no mention of Austen as a co-writer. That being said, the “child as pawn” element is getting trotted out too much in Marvel books. It gets more absurd as Cap fights a villain in the middle of seemingly nowhere in Florida, where despite slews of people with munitions and gunfire, a loaded school bus is driven into the middle of a full scale battle. I’m not kidding. That must be one deaf, dumb and blind school bus driver (oops bad week for a Pete Townshend reference). I can not suspend my level of disbelief that much.

Daredevil 42 (Marvel Knights)
Bendis/Maleev
I recently got into a discussion with Elayne and Robin Riggs about reviewers failing to consider art as part of evaluating the story. I maintained that if a story is poorly written, no amount of good art can save it. Fortunately, with this issue, Bendis clearly proves my point. Maleev’s style has grown on me over time, while Bendis’ storytelling has increasingly grated on me with the passage of time. This whole secret identity lawsuit is really absurd (particularly this closely on the heels of Gale’s Daredevil gets sued arc of a year or so back). While I appreciate such elements as naming a lawyer after CBG columnist and lawyer Bob Ingersoll in the story is cute, Bendis needs to focus on getting out of this arc. How about the ABC News reporter who’s trying to interview Matt outside his office, without a photographer? While the Kingpin-ificiation of The Owl is an interesting concept, that allows for some “real life” elements to the book, it’s not enough to make the issue worth reading.

Weapon X 5 (Marvel)
Tieri/Jeanty/Vines
Does anybody remember when Quesada said the number of X-books needed to be trimmed down. Wasn’t that why Byrne’s X-Men: The Hidden Years was cancelled? This comic reminds me of a bunch of creators who grew up reading Claremont X-Men and decided to start their own homage series. If this were self-published by teenagers I might recommend it. There are comics I read that astound me at their lack of coherence, this is one of them. That being said, the art is solid, I only wish the story was worth reading.

Ragnarok 1 [of 2] (Marvel)
Krueger/Yeates/Villarrubia
Krueger is a fine writer, and while the whole Ross/Krueger X Universe has had its moments, in general I find the series to be so dreary and continually apocalyptic (how many times can life as folks know it end, only to continue), I can’t read it. This first of a two-part mini finds fake/real Thor entering real/fake Asgard and the whole issue is that confusing. The plot is so firmly immersed in the continuity of this futuristic/fatalistic universe that I can only recommend it to those that have enjoyed the previous Ross/Krueger X Universe stories. And the art strikes me as being done by someone influenced by Brent Anderson, with a great eye for layout, but a bad eye for anatomy and action scenes.

Soul War: JLA/The Spectre 1 [of 2]
DeMatteis/Banks/Neary with Feeny
This strikes me as something that could have been done in either the regular JLA or Spectre series. Nothing about the quality of the writing or the art says to me: “worth the $5.95 treatment.” Hal/Spectre as a character has seemingly evolved little since the beginning of his regular series (a book I gave up on after five issues or so). And DeMatteis’ use of the JLA is squandered and strange. To make matters worse, the art team of Banks and Neary (with Feeny) is incredibly off their respective games. In particular, DeMatteis’ use of Spectre (complete with green flame dialogue and narrative boxes) frequently made me wince, and was so wordy it actually crowded out the art. One panel’s narrative box flow was broken up Batman’s ears. Unlike some writers, where a dialogue heavy scene is a delightful treat, more often than not DeMatteis’ writing comes across like Ben Stein’s lectures from Ferris Bueller’s Day Off.

Supergirl 78 (DC)
David/Benes/Lei
I ripped on the two Supergirls arc when it began, assuming it was some sort of Mr. Mxyzptlk ruse. Now that it’s clearly been defined that it is not, I’m intrigued. I don’t know how much David will be allowed to monkey with continuity (heck they let him take one of Aquaman’s hands away, so I guess within reason he can do anything he wants, as it can always be undone), particularly with a cancelled series. David shows again (as he did in Young Justice) a great ability to write Spectre/Hal (much better than the aforementioned DeMatteis). It’s a shame he wasn’t given a chance to turn that book around. Then again, for me, the failure of David’s Supergirl was his preference for metaphysical/supernatural tales, but of course that’s what Spectre is all about.

Sleeper 1 (Wildstorm [Mature Line])
Brubaker/Phillips
I never read Brubaker’s Point Blank, which this series apparently stems from, in some way. And yet, the story stands on its own, there was never a point where I was wishing I’d had background on the characters. Phillips’ art is a perfect noir match for Brubaker’s writing. In a way it reminded me of Brubaker’s Scene of the Crime, but with superpowers. To get an idea of the series, check out this Mile High First Look preview

Wildcats 6 (Wildstorm)
Casey/Nguyen/Friend
I’m not sure who to blame the most, Miller’s use of newscast screenshots to tell a story in Dark Knight, or Bendis for making it even more popular in Powers. Either way, the use of television newscasts in this issue of Wildcats (a series I have never bought before) is incredibly annoying. I mean the first time a Larry King interview moment was used in a work of fiction was in 1984’s Ghostbusters, now nearly 20 years later, it’s become a cliché. And there are elements of this tale that remind me of the only Howard Chaykin’s 1997 Helix/DC Comics book Cyberella. (That reference is not a compliment). And hands down, I would be hard pressed to have viewed a worse cover than this comic. It took me more than a minute to decipher the logo alone.