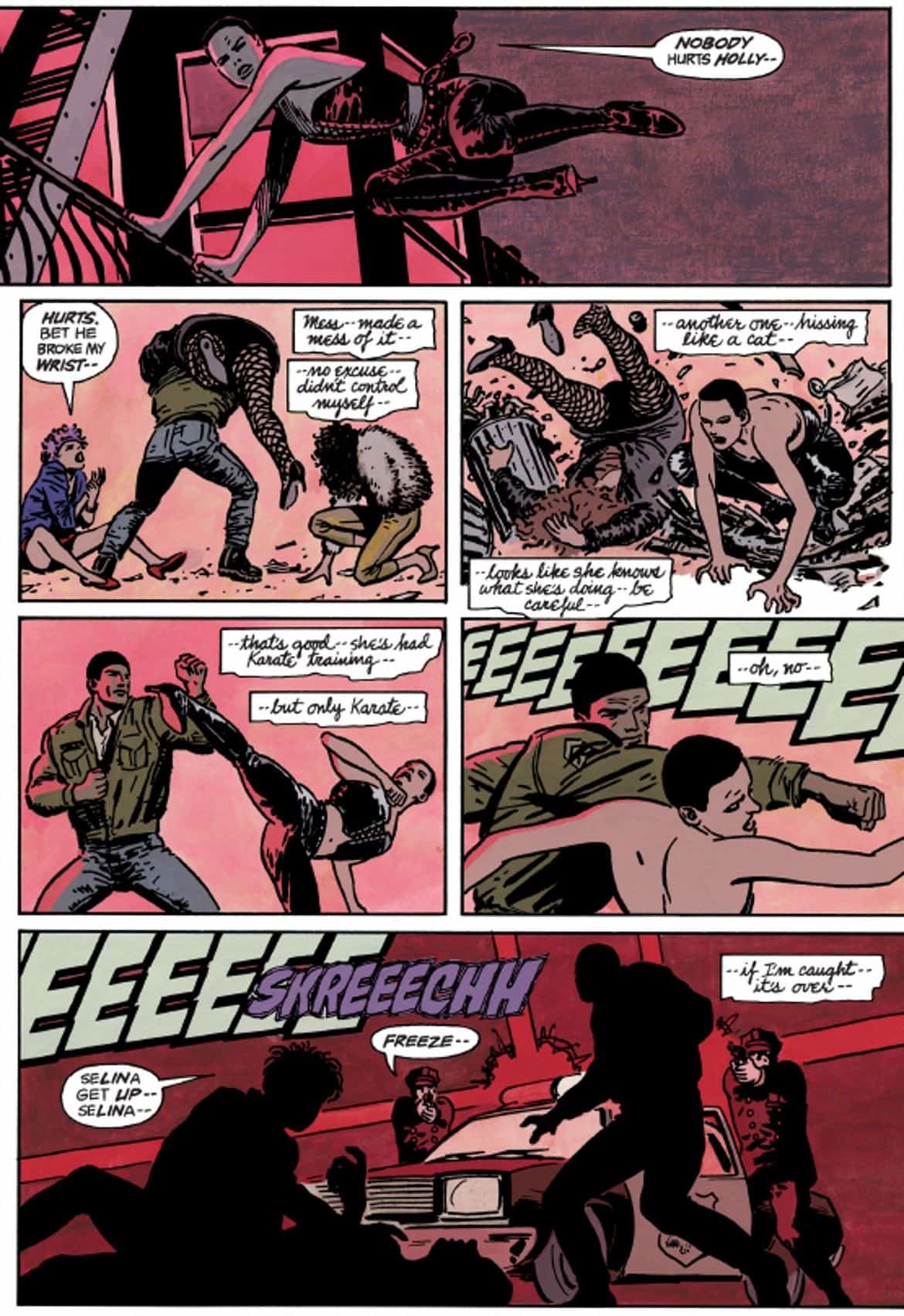 Back in mid-August, Image announced the following:

Originally pitched as a cross between the X-Files and the Rockford Files in a film noir version of 1950s Hawaii, the series opens as Byrd, a former big city detective hiding from his troubles in 1953 Hawaii, is recruited to track down a stolen car. In the process of investigation, Byrd and his partner, detective Mo Kalama, stumble upon a complicated kidnapping plot. Before the case is solved, though, the two have to contend with an eccentric drug lord and his scheming henchmen, the psychic aunt of two island beauties, swank tiki lounges, an exotic bar girl, a high speed chase along the scenic Hawaiian coast, the mysterious Night Marchers of the Pali Highway, and the murdered kidnapping victim, returned from the dead.

Written by B. Clay Moore with lush artwork by newcomer Steven Griffin, Hawaiian Dick is a decidedly different type of crime comic owing more to its writer’s personal interests than what is typically expected from the crime genre.”

Well, lucky for me, it turned out Mr. Moore and I are in the same Yahoo group (Ric’s Comics for those of you interested) and I dropped Clay a line. Before you know it, we had this e-interview. My thanks to Clay for his time and thoughts. Enjoy.

O’Shea: How did this project land at Image?

Moore: Good question. 🙂 Initially, I kind of assumed the project would end up at Oni or Slave Labor, which would have been fine. Those were my two primary targets, for various reasons. But while I was in Chicago I forced a copy of my pitch on Image, and it wasn’t too long before we were talking about doing the book with them. The chance to do the book in color was a major factor in the decision, not to mention the fact that Image is such a high profile company, and most of the people I know who’ve worked with Image have really enjoyed the experience. So far I can only agree. They’ve been great to us, and are allowing us the freedom to craft the book the way we want.

O’Shea: The 1950s was an interesting time for Hawaii, to say the least. In fact, if my research is right, statehood was not declared until 1959. Will its status as a land in transition be addressed or is that too heavy for a crime story?

Moore: It won’t be addressed directly in this first mini-series, but (assuming sales warrant further stories), it’s definitely something I want to deal with down the road. It’s just one more reason Hawaii was such an attractive setting for the book.

O’Shea: On a related note, the press release mentions the mysterious Night Marchers of the Pali Highway. The Pali Highway was being renovated through the bulk of the 1950s, what made you decide to pick this infrastructural landmark as a point of reference.

Moore: The Night Marchers led us to the Highway, to be honest. Due to its history in the development of Hawaii, many Hawaiian legends and myths center around the Pali (the majestic cliff that separates the cities of Honolulu and Kailua) and, in turn, the Pali Highway. It was a natural. One of the places the Night Marchers are rumored to appear.

O’Shea: Even before the first issue has come out, some people of Hawaiian origin (if that is the proper term), have expressed displeasure with the nature of the book. How have your efforts of allaying their concerns turned out so far?

Moore: First of all, this negative feedback has been from a very small minority. I do understand the source of their frustrations, though. I just don’t think they’ve picked the right target in this case. Putting aside the issue of judging the book before it’s even seen the light of day, the best I can do is assure these people that we’re doing the best we can to strike a balance between exciting fiction and respect for the culture. In the end, though, it’s a comic book, not a documentary. If people with concerns will just give the book a chance, I’m hoping they’ll be pleasantly surprised.

O’Shea: It struck me as odd that there were such things as “drug lords” in the 1950s, wouldn’t they be called by another name. Or am I mistaken in this perception?

Moore: Well, that’s a term I used in the pitch. I think the first time we reference this character (Bishop Masaki), Byrd calls him a “dope peddler,” which would be more in keeping with the lingo of the era, I suppose. Comics from the fifties were full of drug stories. We’re just keeping the tradition alive. 🙂

O’Shea: Since this is described as a “film noir version of the 1950s Hawaii” was there ever any thought given to doing the book in black and white?

Moore: Yeah, black and white was what we actually expected. Artist Steven Griffin even developed a personal method of working with gray tones in anticipation of that. But Steven’s colors possess an almost watercolor look that can effectively communicate that sense of “noir.” I think people will be knocked out by what they see.

O’Shea: Since Byrd is a detective hiding from his troubles, will these troubles come back to haunt him in this series?
Moore: No, not in this series. In fact, we don’t dig too deeply into Byrd’s past in this series. But we certainly plan to down the road.

O’Shea: Since the development of this series stems as you say, “the notion of tossing all the things I really dig about pop culture into one big mix,” would you say James Robinson’s STARMAN is a comic that influences your writing at all. If not what writers that swim in pop culture engage you?

Moore: Good question. I’m a huge fan of Robinson’s, but I think it’s more a case of us sharing influences than him directly influencing me. What Robinson did that most impresses me is figure out a way to tell escapist superhero stories in a truly intelligent manner. Others who currently engage me in this “retro pop culture” sense would include Mark Ricketts, whose NOWHERESVILLE (also from Image) was a blast, Steve Laffler, Seth, Richard Sala, and author James Ellroy.

O’Shea: You’ve become well-versed in the folklore of Hawaii, I wonder if you have any interest in delving into other realms of folklore, or detective genres for that matter?

Moore: I’m sure many Hawaiians would laugh at the notion that I’m “well-versed,” but I’m trying! The setting sort of led me into the folklore in this case, though I am working on another project with artist Rick Cortes that ties into supernatural themes. That one is set at the turn of the last century. I do have interests in other detective genres, as well, but I don’t have anything specific planned. I live in Kansas City, and I wouldn’t mind exploring Kansas City in the thirties, at the height of the KC jazz scene.

O’Shea: Given the regional time difference (and cultural differences) between Hawaii, Australia and Kansas City, what kind of challenges have you and Australian-based Steven Griffin had to overcome?

Moore: First of all, we couldn’t do it without the internet. Add the fact that Steven’s a typical artist in the sense that he does his best work in the dead of night, and that neither of us operates on much sleep, and we manage to work together as well as could be expected. We’re in nearly constant contact, it seems.

O’Shea: Are there any other projects that you and original HD: BoP artist J. Bone may collaborate on, in the long term?

Moore: Man, I hope so. J. is a good friend of mine, and I love his work. We have nothing specific planned, and I don’t want a working relationship to strain our friendship, but I’ve got a few ideas that would be right up his alley. Ask him!

O’Shea: Is there anything you’d like to discuss that I may have not asked?

Moore: Just that I’d like to emphasize the role Steven’s played in helping reshape the concept from my original inspiration. As much as I love J.’s work, Steven’s added a bit of a darker texture to the project that I don’t think would have existed with Bone doing the art.

I might also add that we’ll be doing some web-only features prior to solicitation in October. Keep checking www.imagecomics.com for news on these!

Finally, I want to note that we’re aiming this book beyond the standard comic book channels. We know comic fans will love it, but we think aficionados of film noir, private detective stories, tiki culture, and Hawaiiana are going to get a kick out of it, as well. We just hope they can track it down when it hits the comic shops.

An Orca Q&A With Robin Riggs

An Artist With Many Styles: An Orca Q&A With Styart Immonen