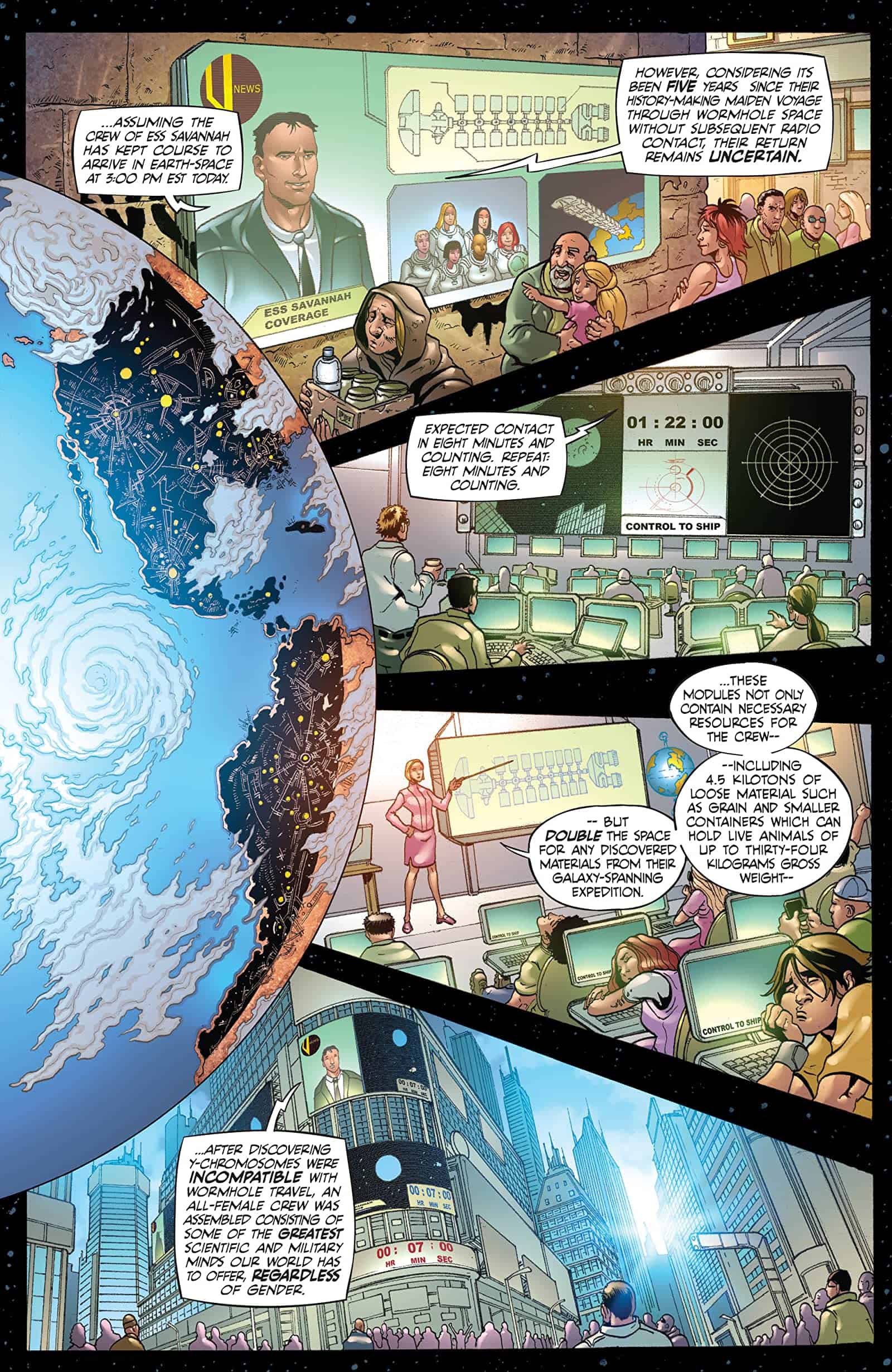 Several weeks back I read in CBEM #365 about Comics Australia, a website dedicated, as the website states, “dedicated to highlighting the comic book industry here in Australia.” Well since I knew nothing about the Australian comic book industry, I decided to seek out one of the folks behind Comics Australia— Aaron Burgess—to find out what I could. Thanks to Aaron and his associates for his time and thoughts. Enjoy.

ORCA: In America, we have the various ages of the comic history (Golden, Silver, Bronze, etc.), for those unaware, could you give me a history of Australian comics?

Burgess: We don’t really have ages like you do in America. Just periods in history. From 1940 to 1945 most publications were one shots due to paper restrictions because of the war. The main themes seemed to be Westerns, Pirates, War Stories, and Spy Adventures.

From 1946 through to 1956 a booming industry occurred. This lead to ongoing serials, and well established publishing houses like H. John Edwards who produced The Lone Avenger, The Hooded Rider, The Crimson Comet, Tim Valour and Biggles. Apache Comics who made comics like El Lobo – The Man from Nowhere, and Twilight Ranger. And Young’s Merchandising who published Yarmak – Jungle King, Davy Crockett – Frontier Scout, The Panther and The Raven. Unfortunately this period also saw the introduction of local companies reprinting US comics, which eventually led to the decline of Australian made comics.

As the 1980’s rolled in, local creators began self publishing on a more regular basis. This saw more adult-orientated titles appear, like Phantastique by New Age Graphics, Vampire by Gerald Carr, and Fox Comics by Fox Comics who for a very short time saw publishing through Fantagraphics. This led to a healthy number of publishers producing Nationally distributed comics, which had not been seen for years. Platinum Grit by Dead Numbat Productions, Bug & Stump by Aaargh! Comics, and Cyclone Comics, and Issue One Comics who released multiple on-going, and mini-series titles over a number of years.

As the 1990’s hit, the successful US format style comics were still being produced, but this time more and more mini-comic publishers were finding their stride. Some of the outstanding comics were Rabbit by Dog Daze Art, Not Toe Jam (Which was originally called Toe Jam, until the publisher Tobbe Blanchard discovered that a comic in the US already had the name), Dex, Book by Mix Comix, and anything from Gerard Ashworth or Tonia Walden.

Like in the past however the US format styled comics eventually drew to a close leaving the underground mini’s to keep the community active.

In the last four years or so, the US format style comic has had a resurge, this time from new publishers. The releases are far less frequent, maybe once or twice a year, but several publishers have taken their titles to the world like Phosphorescent Comics who distributes through Diamond.

ORCA: To a great extent, British comics and creators made an easy transition to gaining and appealing to American audiences, despite some (minimal) cultural and area-of-experience differences. Do you think American audiences, if made aware and given the chance, could be equally entertained by Australian comics?

Burgess: Probably not on a X-Men, Spider Man, Batman scale, simply because if you look at Australia’s entertainment we tend not to produce projects on that level. There are people who want to work on these titles, but the majority of local creators stick to reality as best they can. Even if it contains super powered beings. Basically though our community is just like any other small press community, there’s always a market, we just need to find it.

ORCA: A visit to your web site reveals that are nearly 50 comic publishers, I understand that none are on a Marvel or DC scale, but are their two to three that you would say are more active/popular at the moment than others?

Burgess: Actually there’s more, but I just have not had the time to list them. There’s no one active if you compare us directly to the big publishers in America. Even if you compare us to Antarctic Press, Oni, Avatar, or Sirius for example there’s no one here that can match them either. Well that’s not 100% true. Eddie Campbell is an active self-publisher who regularly releases comics on a monthly schedule, and also works for others. But besides him the closest that we have is Phosphorescent Comics who have produced several mini series over the last few years, Dunwich, The Watch vol1, vol2, and currently Witch King. But nothing on a 12 or even 6 issue monthly schedule. Phosphorescent Comics is the only publishing house we even have. All other publishers are either one or two people producing their own work.

It’s not that most publishers here can’t be bothered, simply financial constraints hold the vast majority of them from producing a regular release.

ORCA: ComicsAustralia.com has been “highlighting the comic book industry in Australia” since mid-1996. In that time has there been one project or creator that you can say “this site helped make that (person or project) a success.”

Burgess: No, I don’t think I could ever claim such a level of success as that. The closest thing to that would be a few people deciding to produce a low budget mini comic. What I have done though is help collectors to find out who has worked in what comic, and brought segments of the local comic book scene together.

ORCA: I’m a big fan of superhero comics, so I was curious to run across the Buzz Productions reprints of the Australian comic THE PANTHER. Is there a large demand (as there is in America, evidenced by DC’s ARCHIVES and Marvels MASTERWORKS and ESSENTIALS) for reprints in Australia? How successful has THE PANTHER reprints been, in particular and will there be more (or is there enough material for more)?

Burgess: I had to quote this from its publisher Kevin Patrick, as I’m not savvy to his business details.

Kevin Patrick-“Reader response to The Panther suggests that, not only does this character appeal to today’s younger comic readers, but that there may be an untapped market for reprints of classic Aussie comics from the 1940s and 50s, when the industry was at its strongest – both creatively and commercially.

Given the ongoing popularity of The Phantom in Australia (which is home to the world’s longest-running edition of The Phantom in comic book form) and The Panther’s comparatively modest success in this field, I think other ‘golden age’ characters, such as Tim Valour, The Crimson Comet or The Raven, could enjoy equally successful revivals amongst today’s Australian comic audience.”

Burgess: A high percentage of it is aimed at mature readers. There has been very few contemporary comics that were created for anyone under 16 years of age. Quarter Acre Kids by Quarter Acre Comics, and SpeedFreaks by Madden Productions are two examples of trying to cater for the younger audience, but were shut down only after releasing a few issues each. The biggest success is Talitha Nonveiller’s Deer Flame series, which has been running strong for over 12 comics, one TPB, and a Graphic Novel. Her market has always been anyone at any age who enjoys a hearty fantasy tale.

Besides those, and maybe a couple of others it’s been this way for a long time now. I think it’s just part of the Australian style. We prefer to produce comics about everyday life, with all the grit on show. There have been numerous debates on this, but in the end you can’t change who we are.

ORCA: Did any particular event or book inspire you to start Comics Australia website?

Burgess: Boredom really. I wanted to create a web site, basically because it was all the rage back in ’96, and I didn’t want to just do a Home Page like everybody else. I decided to see what I liked, and Aussie comics seemed to be as good as anything else. When I started the site I never expected to still be running it years later, let alone watching it grow to the size it has become. I’m very pleased it has though.

ORCA: What is your personal experience and background in comics?

Burgess: Not much really. I’ve only produced one mini in my time. Although I’m currently working with others on a mini about Star Wars ep.2, which should be out soon(ish). I mostly prefer to just promote everyone else’s comics. Though I’m currently seeking quotes on a 130-page anthology, which I’m hoping to have ready for release towards the end of the year.

ORCA: Do you think the fact that self-publishing is becoming even more technically and fiscally feasible will be a boost to the Australian comic book industry in the long term?

Burgess: Maybe in America, but in Australia the financial costs are still out of most peoples reach. Nearly all comic publishers here expect to lose money, and they’re never let down. Besides we need more than just cheap comic production costs. We need a reading audience to sell them too.

ORCA: Let me flip the question around about Americans being entertained by Australian comics. Has there ever been a series that Marvel and DC found great success with in the United States, but that performed poorly in Australia because it was too culturally contextual?

Burgess: I have no idea. But I don’t think it’s ever happened. Most Aussie comic readers buy what ever is popular in America. Unlike movies where I know there have been hits in the US, but failed here, I can’t recall ever hearing about a comic that did the same. I’m sure there’s someone out there willing to correct me on this though.

Next Week:
Interview with Scott Sava, the artist behind SPIDER-MAN: QUALITY OF LIFE and the upcoming Astonish Comics’ LAB 2: ELECTRIC BOOGALOO.