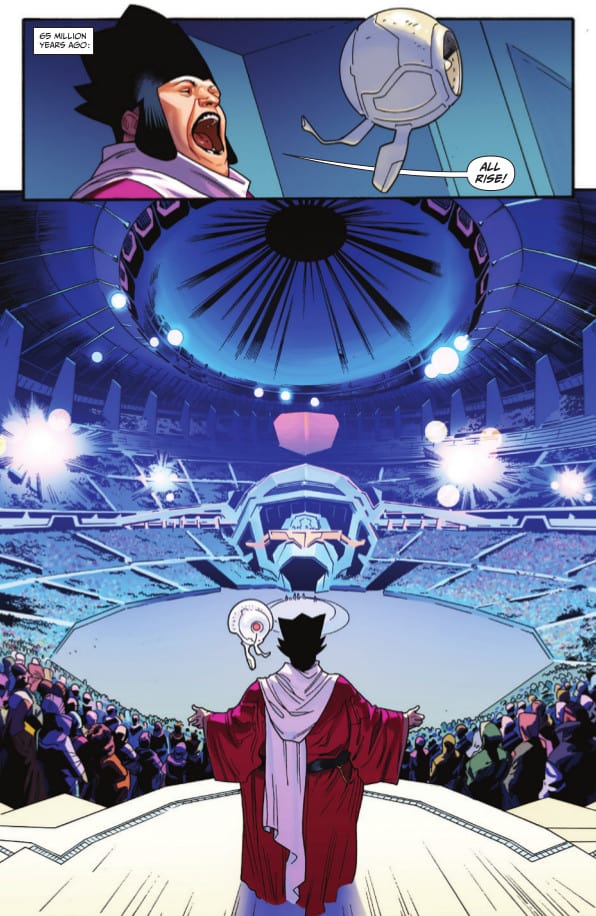 I look forward to any comic that has Immonen on the credit page. He’s an artist that’s willing to take chances and broaden his skills with every project. Lucky for me he was also willing to take my questions and I’m grateful for his time and thoughts. Enjoy.

O’Shea: First off, are you surprised at the strong response for the pseudo-religious Ben Grimm tale that you and Karl Kesel told in Fantastic Four 56? It even was the focus of a mainstream column by syndicated Miami Herald columnist Leonard Pitts Jr.

Immonen: I really didn’t know there was any kind of reaction until I read your question. I found the article interesting in that it barely addresses the issue’s plot, and doesn’t even mention the creators. I’m actually not sure what it’s about, except that the author appears surprised by the revelation that a comic book character might have a background which happens to include a cultural and religious upbringing, and Pitts apparently expects his readership to feel the same way. Karl Kesel mentioned to me more recently that he’d noted some positive reactions to the issue, and told me that it would be included in a TPB collecting Waid and Weiringo’s first issues.

O’Shea: According to your website, you’re about to embark on a six-issue gig on Bruce Jones’ INCREDIBLE HULK (which started with issue 44). How did that come about, and what has been the most appealing aspect so far, both in terms of working with a writer of Jones’ caliber and getting to play with such interesting character(s) as Banner/Hulk?

Immonen: The gig came about simply because (Mutant X and Captain America editor) Andrew Lis recommended me to Axel Alonso, who called and promised a TPB collection, good exposure and a hot series. Bruce Jones is a fine writer who plays his cards close to his chest, keeping secrets from everyone except Axel. I love all the “classic” Marvel characters, and the Hulk is no exception; it’s fun to take a stab a new one. But moreover, I relish the opportunity to try something less “superheroey” and more like a good crime novel, like something from Elmore Leonard or James Ellroy. Bruce has that same level of skill, and tells a slick, measured tale.

Immonen: I’ve done the monthly gig, and it’s a grind. You can’t do your best work, and the fans are generally, in my experience, more critical after a creator stays, say, a year on a book; I think everyone gets bored. I’d rather keep my own work fresh by doing short, self-contained stories, like Thor, Hulk or my upcoming Superman project. It also gives me the opportunity to reinvent myself as the occasion suits. Some people thought my work was too “clean” for the Hulk, but were pleased by my first issue. Others dislike what I’ve done on Thor and the Hulk, and would prefer me to stick with my Superman, or my ShockRockets styles– you can’t please everyone, I guess.

O’Shea: I love it when you and Kurt Busiek collaborate. Any chance for some future SUPERSTAR issues (or anything else with Kurt) in 2002 or 2003?

Immonen: I’d love to, and so would Kurt, but we are both committed other projects well into ’03, so it’s unlikely that another Superstar story is due in the immediate future. The good news is that one of the projects I’m doing now is with Kurt and will come out sometime mid- 2003.

I’m working on a four issue, 200-page Elseworlds Superman story with Kurt Busiek. He is writing and I will be pencilling, inking and colouring, much in the same manner as with the Captain America #50 story. In fact, Todd Klein is also lettering it.

I can’t reveal any story content, or show any pages, but I can tell you that it is scheduled to begin coming out some time next summer. Look for it!

We’re also talking about a possibly expanded ShockRockets TPB in the coming year.

O’Shea: It is well documented that European attitudes toward comics is vastly different than America’s approach to the medium. What is it like (how gratifying) is it to go to a con like the Paris Expo which you attended in early June?

Immonen: The Paris Expo, and more recently, Las Jornadas de Cómic in Avilés, Spain reinforced for me the notion that artists (by which I mean all creators) are generally speaking more respected in Europe than they are in North America. Respect, in my opinion, leads to mature, quality work, which leads to further respect. Not only are creators held in higher esteem, but the fans are educated and knowledgeable about every aspect of the medium. You rarely get asked, “Who’s your favourite superhero,” rather, they ask about techniques and theory and ideas about comics, which promotes more thoughtful answers.

O’Shea: When doing SHOCKROCKETS you had “3D computer models designed to help me keep every drawing of the ShockRockets consistent and accurate.” (http://www.interlog.com/~immonen/projects.htm) How helpful did that turn out being and could you see yourself doing that again for another project?

Immonen: Oh, sure, absolutely. Not only did I learn some new 3D rendering skills, but I think the results speak for themselves, revealing a consistency I couldn’t have otherwise achieved. Of course I’d do it again, under appropriate circumstances– it was a damn good idea for someone like me, who likes to research everything before diving in. It’s easy to draw the Empire State Building– there’s lots of pictures and drawings of it already. It’s much harder to draw something completely invented without some kind of reference– without a computer, I probably would have made scale models, which would have been entertaining and useful in much the same way.

O’Shea: Looking at your weblog, it appears you’re renovating your house in addition to your art gig. How hard has it been?

Immonen: I’ll just say that owning a house means a certain amount of renovating. This house in particular (1920s centre hall plan) has had exposed many layers of… unpredictability. It’s fun, really!

O’Shea: Also on your weblog there are pretty regular suggestions for good films and books. How much would you say films and books influence your art, and can you cite some particular influences?

Immonen: Ha! I hope they’re good suggestions! Sometimes they’re suggestions for things to avoid at all costs. I’m always learning; absorbing information, ideas, technical stuff like lighting and composition… I don’t think any one thing directly influences or even turns up in my work unfiltered. That is to say, it all gets dumped in and mixed up. I recently watched Truffault’s Day For Night on an airplane– I didn’t like it overall, nor would I have gone out of my way to seek it out, but there were interesting and useful bits that I’ve filed away. I don’t read much fiction, so the books I read are usually quite dry, but they’re full of fascinating facts. Still, I love good cinematography, and try to make my work “filmic.” The short answer is that the weblog’s just for fun, and the Stocking the Bombshelter section reflects that spirit.

O’Shea: Final weblog question, you’re apparently doing “the drawing for the new mural for the reception area” for DC’s offices. Do you do a basic drawing and then painters somehow get it to the wall? Or will you actually be drawing on the wall?

Immonen: I’m preparing a large (5 foot long) image in pencil and ink in the traditional comic way, which will be computer coloured over a hi-res scan, and then output on adhesive film. The design incorporates planned breaks in the art, so it can be applied directly to the wall in strips, like a billboard, or wallpaper.

O’Shea: You’ve been in the comics industry for well over a decade. As an artist, how do you think you’ve improved the most?

Immonen: In every way, I hope! I’m still learning about the basics; mood, drama, lighting, composition, anatomy, camera angles and so on. It never ends really. Sometimes, I feel that I’ve stagnated, or maybe more accurately, plateaued, which usually means it’s time to move on to something new, which will inspire some creativity. Over the past year, I’ve been working on my colouring skills, which ought to become more useful on future projects.

O’Shea: In my opinion, your story in Captain America 50 was a major departure from your typical style. Am I correct in this assessment, and if so would you like to do more work like that in the future.

Immonen: Oh, sure it was different. The good news is that I’ve already done more with it (in particular on the Just Imagine Stan Lee creating the JLA TPB for DC, and for Semic’s Spécial Rodéo magazine) and am using the techniques I explored on Cap on the Superman Elseworlds I’m doing with Kurt B. But I don’t think that changing gears periodically for me is a new thing. Compare Thor to Superman, or Legion to Final Night or ShockRockets.

Immonen: Kathryn Kuder’s (Mutant X and Captain America) story describes in a fun way how to make and use a pinhole camera, and hopefully inspires kids to try it out. It’s brilliantly simple, and the story is charming as anything. The art is straight cartooning, and owes a lot to Georg Olsen, who designed and illustrated title cards for CBS in the 1950s.

O’Shea: Again, given the number of years you’ve been in the industry, you have quite a body of work. For fans who only recently discovered you in the late 1990s/early 2000s, is there some work you did that you felt was overlooked when it first came out, that you wish more folks knew about and would seek out?

Immonen: No, I hate everything I did prior to yesterday. I keep hoping that I’m improving, but I’m just never sure… maybe that’s why I keep changing styles… even Cap 50, which was so radically different, was just preparation for what I’m doing now.

O’Shea: Is there any character or creator that you’d like to work with that you’ve not had the chance?

Immonen: No, I’ve drawn just about all my childhood favourites by now. I prefer to keep looking forward, doing new things. But playing in the superhero sandbox is still fun and I expect I’ll be there for a few years to come.