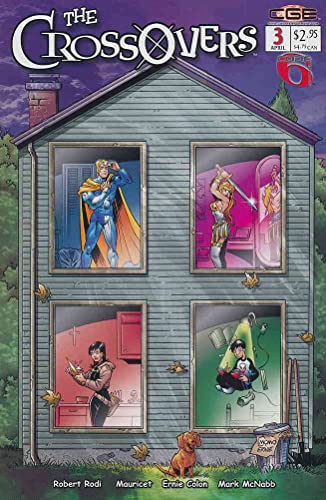 I think Robert Rodi’s writing on Marvel’s Elektra is going to garner him a great deal of new fans. But if these new readers like his Elektra, they should definitely be reading The Crossovers his new series for CGE/Code 6. Through the help of CGE’s Bill Rosemann (a man that should be writing a series for Code 6 as well, in my opinion) I was recently able to interview Rodi about his work on The Crossovers. Enjoy. (Also appreciate Rodi’s ability to turn my first bad question into an interesting answer, now that’s a talented writer!)

O’Shea: It seems that some reader/reviewers have come into the book with certain expectations about this book. Would you agree that it seems some readers were expecting a comic book version of your novel, WHAT THEY DID TO PRINCESS PARAGON? How frustrating is it when it seems people mistake a failure to meet their expectations as a failure to tell a good story?

Rodi: Since PRINCESS PARAGON was my least successful novel (it’s the only one actually to go out of print), I can’t imagine there are enough people familiar with it to expect more of the same in THE CROSSOVERS. And by and large, I’ve been very happy with the critical response to the book. As you say, certain parties did approach it with preconceived ideas about what it is or should be, but that’s par for the course when you’re doing something new.

It takes time to register. People look for familiar touchstones. Even when I was pitching the book, I’d get blank stares till I said, “It’s Superman and Buffy as the parents of Xena and Fox Mulder.” That always got a reaction, even though it’s not really THE CROSSOVERS at all.

O’Shea: Has there been a scene in the issues so far that have proven far more effective or well-received than what you expected when you first wrote the scene?

Rodi: No one scene in particular, but the subplot with Cliff and the aliens seems to be the overwhelming favorite among readers and critics. Which surprises me, because I thought that was the one I had the least secure grip on. Go figure.

O’Shea: As a seasoned industry journalist, how much fun/interesting was it to collaborate with an industry veteran like Ernie Colon?

Rodi: It’s been a lot of fun. Especially since Ernie’s AMETHYST comic was one of the direct influences on THE CROSSOVERS (well before I had any idea he’d be working on the series). And Joe Staton is taking over the pencilling in #7.

As I never tire of telling people, I can distinctly remember the moment in 1973 when I bought E-MAN #1 off the stands. I’ve been a fan ever since. So that’s exciting as well.

O’Shea: Is Cris’ experience an intentional satire/commentary on the potential down side of a C.S. Lewis/Narnia kind of life?

Rodi: It’s a bit of Narnia, yes, but also a bit of Xena, some AMETHYST (as noted), and lots of girls’ fantasy in general. What I’d like is for each of my characters to exude familiarity on a number of levels, without being analogous to one source more than any other.

O’Shea: As a writer/novelist who has in the past acknowledged that he doesn’t follow the comics industry very closely, what is your attraction to comics?

Rodi: I’ve often asked myself that, especially since I’m now in my forties and need some justification for continuing to buy the damn things. What I’ve concluded is that comics have a twofold attraction for me. First, I just plain love the sensuous appeal of ink on paper. It’s fundamental. Without that, I don’t think anyone could ever really love comics. It may also be why I like them best in black and white. Second, I love following serialized stories over a period of years. Not just in this medium, but in novels, on television, anywhere. Put the two together, and it’s no wonder this is a medium in which I continue to invest so much affection and interest.

O’Shea: While the comic so far has focused on the four members of the family, you’ve also introduced an equally interesting supporting cast. Will there be issues or arcs that focus on storylines other than the family. Or is the heart of The Crossovers the family, a focus that cannot be diluted?

Rodi: For the forseeable future, we’ll be focussing on the family and their relationships with each other. Right now, none of them has any knowledge of the secret lives of the others. That will change, but not all at once; we’re taking our time with it. In the meantime, certain supporting characters will step into the foreground for a while, for variety’s sake. We’ll also be introducing some new Crossovers — members of the extended family, each of whom embodies a genre of his or her own. It’ll be fun.

O’Shea: How much of a back story do you have developed on the family? Were there interest, do you have material to tell the lives of these folks before these “present day” stories? I’m really intrigued by Calista’s past in particular.

Rodi: I’m planning an Origins arc for the second year — probably beginning in #14. I held off because I wanted everyone good and tantalized first; also, I have in mind a completely wild ending for the arc which would be meaningless if you didn’t already know the characters fairly well.

O’Shea: I know you are also a screenwriter. Given CrossGen’s desire to get their various properties (and related creator-owned projects) into other realms of entertainment, are there film or television discussions regarding the Crossovers?

Rodi: THE CROSSOVERS has been optioned by Davis Entertainment, which will be developing it as a live-action TV series. That’s all I know so far. I won’t be directly involved with the production, if for no other reason than you have to live in L.A. to write for series TV, and I don’t live in L.A. Or want to. But CGE is very firm about having their writers consulted on film and TV adaptations, God bless ‘em. I’m very excited to see what Davis comes up with.

O’Shea: I was wondering, as the editor (of the first three issues) what role or influence has Chuck Dixon had on the series?

Rodi: Chuck’s role was mainly to laugh at the scripts a lot and make me feel good about them. Which was very gratifying to me, because he’s an amazing writer (WAY OF THE RAT is one of my favorites) and if he’d zeroed in on any problems I would’ve felt unduly humbled. Now I’m working with Ian Feller as editor, which has been great too, especially since Ian was my first contact at CGE. He’s been extremely supportive, and always has some razor-sharp suggestion or other to lob at me.

O’Shea: Is there anything you’d like to discuss that I did not ask?

Rodi: No, although this may very well be the first CROSSOVERS interview without a single question about Cubby. Since I won’t answer those questions, this is something of a relief.

An Artist With Many Styles: An Orca Q&A With Styart Immonen