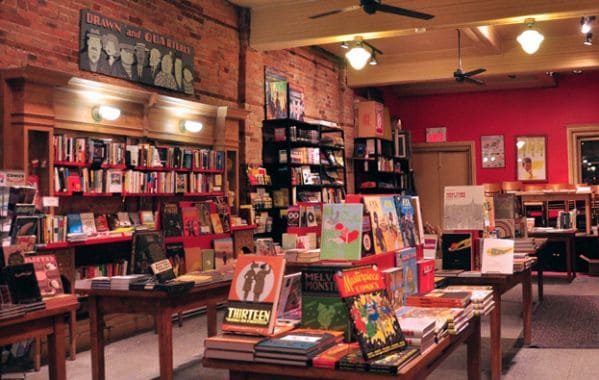 In the wake of the LPC bankruptcy announced last week, Top Shelf, in desperate financial straits, put out a call to the comics community to help by buying some of their product. In only half a day, they were able to raise the money they needed. Now, though, Drawn & Quarterly is suffering similar cash flow problems. I’m not as familiar with their line as I am with Top Shelf, but of the books I do know, there are these:

BERLIN and JAR OF FOOLS by Jason Lutes
The former is a richly detailed tapestry of a story about life in Germany between the two world wars, focused on a small group of people living their lives as the politics and societal structure around them slowly begins to evolve. The latter is about a failed magician down on his luck and haunted by the memory of his dead brother. Both stories are told in a simple, direct manner with a sharp emphasis on character interaction and development, with beautifully rendered illustrations.

THE FALL by Ed Brubaker and Jason Lutes
When a guy is blackmailed into working for a spoiled housewife, he stumbles onto the remnants of a mystery involving a decade-old murder. Intriguing and very realistically written, with fantastic art.

I NEVER LIKED YOU by Chester Brown
A minimalistic coming-of-age story, done with pathos, dark humor, and drama. Very bittersweet and tender.

SAFE AREA GORAZDE by Joe Sacco
The author’s accounts of his time as a journalist in Bosnia during the 90s, which include not only a history of the politics there that has led to civil war, but a vivid portrait of the people who live, laugh, and love there amidst the chaos.

THE GOLEM’S MIGHTY SWING by James Sturm
Set during the Depression, this graphic novel is about a barnstorming Jewish baseball team who, in a financial bind, decide to create a version of the mythical Golem and put him in the starting lineup.

SLEEPWALK AND OTHER STORIES by Adrian Tomine
A series of short stories chronicling the mysteries, sadness, humor, and banality of everyday life, with sharp writing and solid artwork.

If you can help, head over to their website, www.drawnandquarterly.com, and check out their complete title list. For every order of $150 US/$235 Canadian or more (before shipping costs), you’ll get a free copy of the forthcoming Chris Ware sketchbook (available in North America only). This offer is good until the 17th. You can also call (514) 279-2221, from 9-5 EST Monday-Friday, to place orders, or mail a check or money order to:

So where do we go from here? While the publishers involved expressed their support for LPC, it remains to be seen how long it’ll take for them to get out of Chapter 11 – and not every publisher will be able to cope the same way. I spoke to my publisher, Ron Gravelle of Landwaster, about the situation and it turns out he wasn’t surprised by it at all.

“LPC folding was something I saw coming,” said Ron. “Something you might look into is Diamond’s closing of warehouses; they have closed 3 or 4 this year [and are] moving them to the Memphis facility. However, moving the England facility from Baltimore to Memphis worries me. They are downsizing but trying to put a positive spin on things.”

Landwaster’s product has exclusively been original graphic novels. Ron pointed out a decline in graphic novel sales market-wide since September 11 and emphasized the need to expand the reader base beyond its current proportions. “Currently I am re-tooling all the future books into shorter, more serialized versions. We did some market research at a West Coast event recently and the public has told me what they want. Personally, I feel bad for the gang at Top Shelf, but I also think they may have overstretched themselves, a la Comico, First, and Now, not to mention Innovation (all these companies dwarfed Top Shelf). It happens very fast in this industry. Things change and you have projects in a 4-month pipeline that can’t be stopped.”

As part of this restructuring, Ron said he was developing a web strip using Flash technology in a way which he says is unprecedented. (Without giving away too much, it’ll be called EL OSO, and is about a masked wrestler. I’ll let you know about it when it’s ready to go.) He stressed the value of the Internet as a means to reach consumers directly. “We need to sell more merchandise via the web right to the customer, cutting out the middle man.” You can see what Ron has to offer at www.landwaster.com.

If anything, I hope this event underscores the value of independent comics and their vast diversity of product. I look at comics message boards and I see which books fans buy, and generally their buying habits don’t deviate very far from Marvel or DC, who are very good at putting out superhero books, and have been for decades. Sometimes I fear that if only Marvel and DC were around, they’d be perfectly content with that. Would you be? Think about it… and decide for yourself.

“Black images in the comics” a book review