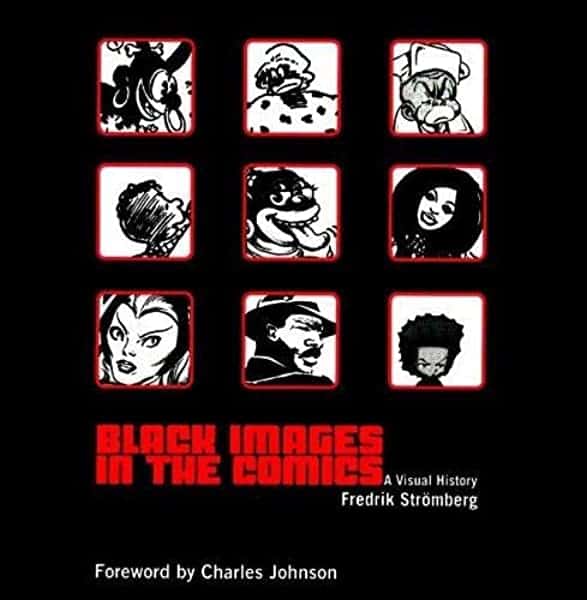 African Americans, long under- and misrepresented throughout comics history, have undergone radical changes within the comics themselves during the latter half of the 20th century. Much of this can be attributed to the turbulence within society itself, as America slowly began the ongoing process of recognizing us as individuals entitled to the same basic rights as white citizens. When looking over the depictions of blacks in comics art, one cannot help but notice how a shorthand, near-uniform iconography evolved and remained the standard for so very long. Indeed, it is easy to forget that distinctive, more diverse representations are a relatively recent phenomenon.

The new book BLACK IMAGES IN THE COMICS: A VISUAL HISTORY [www.fantagraphics.com] by Swedish comics journalist Fredrik Stromberg, charts the progress of these representations in a timeline dating all the way back to the early 1800’s. (This was a pleasant surprise – to discover evidence of what we now think of as comics predating Scott McCloud’s unofficial starting point of Rodolphe Topffer in the late 1800’s.) Stromberg provides a broader perspective by including comics from around the world as part of his timeline, and one can see that in many cases, these comics take their visual cues from America in their renderings of black people. The book’s format is a simple one: images on the left, followed by commentary from the author, in chronological order. It made me feel like I was back in art history class in high school, looking at slides while listening to the teacher lecture. (In fact, Stromberg runs a comics art school in Sweden.)

In looking at the early 20th century images, one important point to remember that Stromberg brings up is that these comics were created by whites for whites. Blacks almost resemble a different species, with the constant use of thick white lips against coal black skin and a button nose, and Stromberg argues that in all likelihood, such a depiction was considered acceptable then. Therefore, we see such images in the works of renowned early creators like Winsor McKay, George Herriman, Herge, and others, accompanied with mangled English dialogue. Stromberg cites the major black stereotypes – the laughing coon, the servile mammy, the violent buck, etc. – and how they show up with little, if any, deviation from one strip to the next. In his introduction, celebrated black cartoonist Charles Johnson calls this constant misrepresentation “intellectual and creative laziness,” and in seeing so many of them, so often, one cannot help but agree.

Seeing these images made me wonder: did the creators feel obligated to include them in their comics? Did their white audiences expect to see stories with African “savages,” or docile servants in domestic settings, or comedic sidekicks in action tales? Will Eisner’s Spirit is universally regarded as a trailblazing strip due to its visual style and unique storytelling techniques. Is it that greatly improved by having the character Ebony in it? Or at the very least, could he have just as easily been created as a white boy instead? My gut feeling is that while they may not have actively demanded them, audiences back then believed such characters to be part of their world, however narrow it actually was.

Stromberg also talks about the dialect of the black characters, liberally peppered as it is with unusual contractions and phonetic spellings. It made me think of how historically, black slang has always been picked up and co-opted by the white counter-culture, from the Harlem renaissance days of the 1920’s, to the jazz-era ’50’s and rhythm-and-blues ’60’s, to today’s hip hop. It is quite ironic that while black people in America have been treated as second-class citizens at best, aspects of our lifestyles have always been a great source of fascination for whites. There’s a great scene in Kyle Baker’s graphic novel Why I Hate Saturn that exemplifies this dichotomy. When Anne asks her friend Ricky why her magazine has hired him to write about black culture, even though on the surface he doesn’t seem qualified to do so, he answers, “Look, Black music is in, Black culture is in, but Black people will never be in.” He goes on to tell her that his grandfather told him about Duke Ellington and the Cotton Club in Harlem, and when she asks, “Wow, your grandfather saw Duke Ellington?” he answers, “Silly, Blacks weren’t allowed in the Cotton Club!”

Following World War 2, the trend began towards making blacks in comics more individual and realistic, and Stromberg follows the pattern from war comics, to strips in black-owned newspapers, and on into mainstream newspaper syndicates in the ’60’s and ’70’s. He also shows us how white writers, in a reflection of the rapidly changing times, tried to address the matter of racial injustice in comics, to varying levels of success. Included is the infamous “What have you ever done for the black skins” scene from Green Lantern/Green Arrow, and looking at that scene again, I finally figured out what it was about it that always bugged me. The question is patently unfair: it seems to suggest that blacks need a “great white father” always looking out for them and demands that GL serve a specific agenda, which to my knowledge he never really has (though my knowledge of the character’s history is limited). Plus, it fails to take into account all the times GL, either solo or with the Justice League, has saved the world – including blacks. But I digress.

Throughout the book, Stromberg also shows us images of blacks from around the world, including his native Sweden, England, Japan, Belgium, South Africa, and more. In a number of cases, he cites that many of these countries have a minuscule black population, and that these images were adopted from American comics without any context. Later on, we see a progression away from the stereotypes and into more nuanced portrayals, as with the American comics, and he mentions how some European comics during this era seemed to have been made as a means of penance for human rights violations of the past. Tidbits like this add greatly to the book’s overall theme.

Stromberg concludes with the modern era and images from, among other titles, Curtis, Spawn, Hate, and Static. In his afterword (much of which simply reiterates what has already been said), he states his belief that more black cartoonists are needed, which I agree with. However, he also says that many of those that exist today “seems [sic] to do comics in the same tradition as the majority (that is to say the white part) of the cartoonists.” This makes me wonder how aware he may be of the small press and online comics communities in America, where any number of non-traditional works by black creators can be found. He does also say that it’s not always apparent whether a cartoonist is black or not, which is true. But when he says “the white part of the cartoonists,” it’s unclear whether he means corporate superhero comics, which are rarely about individual expression and more about merchandising to a marginal audience, or perhaps newspaper syndicate strips, which are for a much wider audience and generally intended to be safe and non-challenging. He scratches the surface on these differences in the book, but doesn’t go much deeper.

Overall, though, Black Images in the Comics makes for a good resource from which one can explore further in any number of directions. Stromberg states in his prologue that this book is not all-encompassing and is not meant to be a strictly academic text. Still, anyone with an interest in the subject will find this an excellent starting point to get a handle on how far depictions of blacks in comics have come in two centuries.

A View From The Cheap Seats