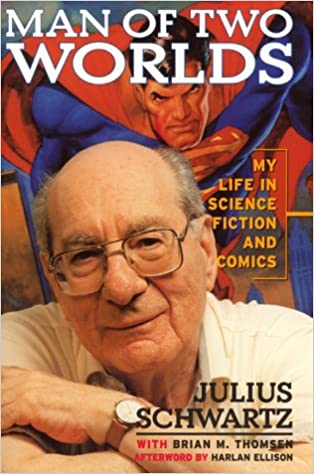 Prophetic words, perhaps, when one considers the “living legend” who uttered them when asked about the future of comic books at a panel discussion Saturday.

Highly respected in the field of science fiction and comics, Julius Schwartz’s accomplishments are too numerous to mention: while still a teenager, Schwartz founded the first science fiction fanzine, helped launch the first world science fiction convention, and became a literary agent to such distinguished authors as H.P. Lovecraft, Robert Bloch and Ray Bradbury.

Schwartz began a 45-year editorial career with DC Comics in 1944 — a career that saw the end of the Golden Age and the start of the Silver Age with successful relaunches of The Flash, Green Lantern and the Justice League of America.

After a 16-year stint as editor of the Superman comics, Schwartz retired in 1985 to become DC’s “goodwill ambassador.” His most recent project is his long overdue publication of his biography, “Man to Two Worlds: My Life in Science Fiction and Comics.”

Essentially a Q & A session, Schwartz spent an informative and lively hour answering questions about his science fiction career, his comics career, and Schwartz shared many anecdotes about creators he has known and worked with over the years. There were also anecdotes about how covers were generated and stories made to accommodate them.

The session got truly interesting when Schwartz was asked about the current state of the industry. He related the obvious sentiments about the industry ignoring or alienating young readers. How the industry hopes to survive without a new audience to replace the current one has been a point of contention for years. In what shape will the industry be in 20 years? 10?

Now, owing to Schwartz’s longevity in the business, his many awards and accolades and the sheer volume of his experience, hearing a “living legend” say that comics have no future that he can see is something to consider… isn’t it?

Miller Honored as Defender of Liberty