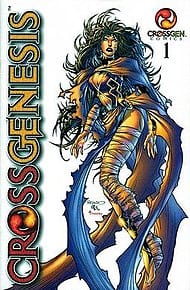 TAMPA, FL., March 5, 2002 – CrossGeneration Comics, Inc. and ORCAFresh.net have joined together to offer CrossGen Comics on the Web, the first subscription-based distributed library of Internet-based comic books usable on PC and Mac platforms with a potential audience well into the millions.

For the subscription price on only $1 per month to start, users will be presented with Web comics in an easy to read format accessible in seconds from even the slowest dial-up connection. They read just like a printed comic, but with a rich set of features developed in Flash by one of the medium’s most renowned programmers, Gabo Mendoza of Gabocorp Studios. Initially launched with more than 50 CrossGen issues available, accounting for more than 1,100 pages, the library will grow to more than 160 issues and 4,400 pages by the end of 2002, rising at a steady pace to nearly 20,000 pages and more than 800 issues by 2005. The number of issues available, when calculated against the $1 per month base, brings the cost per comic down to about 3 cents at launch time, and reduces it to about half a penny by the end of 2002.

The aim of CrossGen Comics on the Web is to create a low-cost point of entry for new readers in places already populated by those potential new readers.

“As an industry, we cannot continue to market comics at ever-increasing prices to a shrinking audience and expect to have a future,” said Mark Alessi, CEO and Publisher of CrossGeneration Comics. “If we are to attract a new audience and a new generation of readers, then putting our comics on our Web site is a bit backwards, because it only exposes them to people who already read our comics. We need to use the Web as the new newsstand, and put comics in front of people who haven’t tried comics in a while, if ever, and then lead them on a path back to bookstores and comic shops so they can be aware of the enjoyment that graphic fiction provides. We are convinced that the best way to do this is to offer comics at an incredibly affordable price to an ever-increasing number of people – the exact opposite of the way things work today. If even a minute percentage of these millions of people enjoy this entertainment, everybody wins.”

CrossGen Comics on the Web will contain links to a list of CrossGen’s Premier Retailers, including store names, zip codes and even road maps, allowing curious new readers a fast and effective way of finding a comic store in their area that is assured to carry CrossGen product, when they inevitably want hard copy versions of their favorite stories.

“One of CrossGen’s missions has always been to bring new readers into comics and into the CrossGeneration universe in general,” said Tony Panaccio, CrossGen’s VP of Product Development. “Our partnerships with comic book niche portal sites like ORCAFresh.net should help us bring in the rest of the comic book reading audience that has yet to try our comics. We’ve built in literal roadmaps that will carry new readers from Comics on the Web to CrossGen’s Premier Retailers and other retail partners. We’re rebuilding the feeder system for new readers into the comic book hobby brick by brick, and Comics on the Web is our foundation.”

CrossGen Comics on the Web were designed to be read simply and easily by even the most novice of Web surfers or comic readers. The Flash-enhancements allow for quick download times even on the slowest of connections. The only waiting occurs as the first page image loads. Following pages load in the background, allowing readers to begin reading within seconds of opening Comics on the Web. Once a reader begins, they can simply roll their mouse pointer over the word balloons and the size of the word balloons increases to make viewing easier. Throughout their experience other features make CrossGen Comics on the Web simple to use and enjoy. “Story So Far” information is available during every issue. Character biographies and current issue descriptions are also available. And a handy Help function shows how to make every function work properly.

“After we passed the planning stage and realized that we were ready to implement our plans, we knew we needed someone special to make all our ideas work,” said Courtland Whited, CrossGen’s MIS director and Webmaster. “The only person for the job was Gabo Mendoza and his Gabocorp Studio. His name has been associated with incredible Flash programming since Shockwave was created years ago. If you want to create the best Flash product, you have to get the best Flash programmer in the world. We did. And he’s now a full-time member of our staff, already working on updates to make version 2.0 and further even better than what you see today.”

To see and sample CrossGen Comics on the Web, go to:

CrossGeneration Comics is based just outside of Tampa, Florida. Since their initial launch on May 24, 2000, CrossGen Comics has set unprecedented sales records for a new start-up comics publisher by debuting nine releases on the comic book industry distributor’s Top 100 sales list. Since then they have grown into the comic industry’s fifth largest publisher. They were awarded the Diamond Gem Awards for Comic Publisher of the Year (2000) Under 5% Market Share and New Publisher of the Year (2000). They were recently nominated in the category of Favorite Publisher in the 2001 Wizard Fan Awards. CrossGen Comics is unprecedented in that their entire line of comics is currently published in eight foreign languages and in at least 15 foreign countries. They recently struck a long-term development deal with Branded Entertainment, a film and television production company helmed by long-time Batman film and animated feature executive producer Michael Uslan. CrossGen has also engaged Nancy Newhouse Porter, Chair of the Entertainment & New Media Group of the law firm of Weston, Benshoof, Rochefort, Rubalcava and MacCuish, as its entertainment attorney. She has worked on deals for films such as “Toy Story,” “Toy Story 2,” “Monsters Inc.,” “Shrek” and most recently “Ice Age,” and brings with her six years of business development experience at the Walt Disney Company, as well as a reputation for excellence recognized widely by studio heads in Hollywood. CrossGen will be the only comic book company that Newhouse Porter will be working with in this capacity. The company has also opened the first publisher-owned online mall for its licensed apparel, products, collectibles and comics at www.crossgen.com. Their unique and innovative approach to comic book publishing is sure to make them a company to watch out for well into the new millennium. The CrossGen Comics, The First, Mystic, Sigil, Scion, Meridian, Crux, Sojourn, Ruse, and Negation are available now in comic book specialty stores everywhere, with a different one on sale each Wednesday. Their next monthly title, The Path, will be in stores on February 27, 2002, followed by Way of the Rat, coming in May and CrossGen’s first horror title, Route 666, coming in June.

Exiles is Crisp, Refreshing, Event if it is an X Book